The Most Widely Distributed Crocodile of the New World

The American Crocodile is a relatively large species, with males reaching a length of 5-6 meters. Grown females generally measure 3-3.5m in total length, but individuals of up to 4.4 meters have been reported. Although the American Crocodile rivals the salt water crocodile (Crocodylus Porous) and the Nile Crocodile (Crocodylus Niloticus) in size, it is not as aggressive and does not include human beings as part of their diet as the other two species do. Crocodiles are ancestral animals; whose origin goes back more than 200 million years.

They have witnessed the rise and extinction for the dinosaurs as well as the evolution of birds and mammals. Throughout their evolutionary history they have adapted to their environment to become one of the most efficient apex predators that exist. Crocodiles have a significant ecological, scientific, medical, economic and cultural importance. As apex predators they exercise selective predation over fish and other animals, increasing nutrient recycling and distribution. They are also considered the eco-system’s “engineers” due to the fact that they maintain and modify the structure of the bodies of water, as well as their flow.

Besides, during draughts they create water refuges that increase bio diversity and heterogeneity. It is for this reason that crocodiles are considered key species, because they play an important part in maintaining bio-diversity and equilibrium within the eco-system. 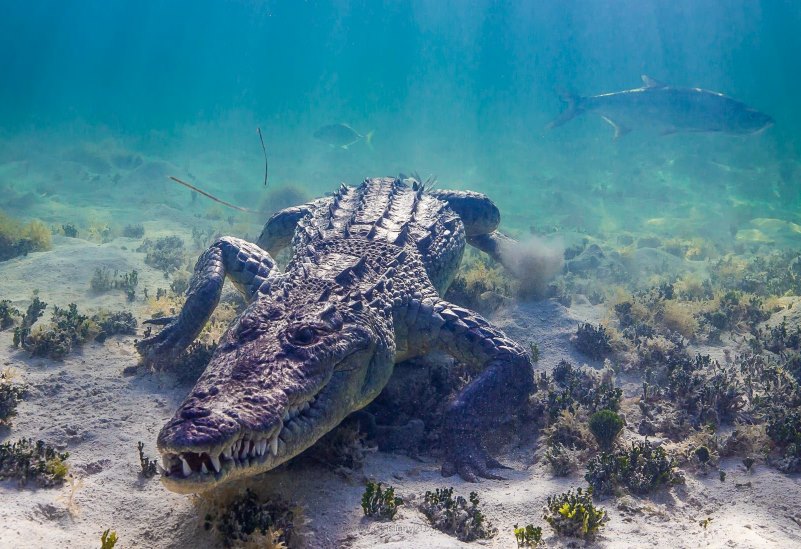 The American Crocodile population in Banco Chinchorro is of great importance to the conservation of the species in the Yucatan Peninsula. It is one of the last two genetically pure populations in the Mexican Caribbean, has a relatively large size with individuals in all age ranges, has a good nesting success rate and is protected by being in a Biosphere Reserve subject to few threats due to it´s isolation from the continent.

Comparatively, populations on the continent are reduced, with few younglings, are fragmented and present a high hybridization rate with another species of crocodile present in the region, the swamp crocodile (Crocodylus moreletii), which lives in fresh  water. Unlike island populations, these populations face a series of threats such as polution, fragmentation, habitat destruction, illegal hunting and predation.

Given this situation, the population in Chinchorro presents itself as a good source for individuals to re-populate decimated continental populations. Another important characteristic of Banco Chinchorro is water clarity. In some parts of the Reserve it is possible to observe crocodiles like in no other place. One of the difficulties of researching crocodiles is that these animals are difficult to observe in their natural habitat. This is particularly true of behavioral observation, with most studies having been carried out in captivity.

Banco Chinchorro presents conditions suitable to carry out these types of behavioral observations in the wild because individuals allow humans to get close and observe, and because the water clarity allows us to photograph and film individuals underwater with a clarity that cannot be observed anywhere else.