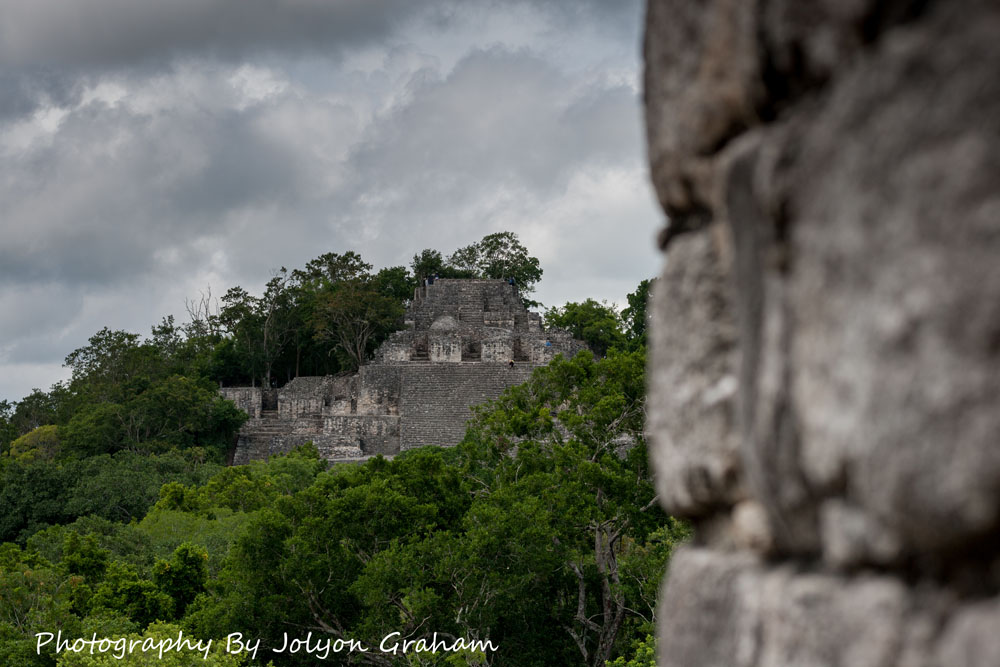 Mexico, Off the Beaten Trek: Calakmul

“The Calakmul Biosphere Reserve represents a heroic effort to preserve the Mayan heartland: not a tree can be felled, not an animal hunted.” – Travel & Leisure

Who were the ancient Maya? Entire museums and academic departments have been devoted to the study of their complex societies, mythologies, art, languages and—perhaps the most compelling mystery of all—the sudden collapse of a once-powerful civilization (now believed to have been caused by rapid deforestation and drought). And while there are many places to see Maya ruins scattered across the continent, none compare to Calakmul.

Hidden deep within the Tierras Bajas, the second-largest tropical forest in the Americas, Calakmul is the largest site uncovered to date in the Maya lowlands. Yet, due to its remote location and protected status, it receives relatively few visitors—none of whom arrive by tour bus. One narrow road, only recently paved, leads into the vast reserve. Near the entrance is a small parking area, a ranger station and a restroom, but you won’t find food carts, touts or souvenir stands. For travelers interested in Maya history and culture, it offers a fascinating glimpse into a lost world. And wandering through the ruins undisturbed, except perhaps by the cries of a toucan or howler monkey, is like going back in time.

“Most people have only heard about the ‘famous’ ruins: Chichen Itza, Uxmal, Tulum. What’s wonderful about Calakmul is that it’s completely non-commercial, still surrounded by jungle and wildlife. It’s nothing like Cancun, where you have tour buses lined up in big parking lots…it feels like you are going out into the jungle to explore it for the first time.” 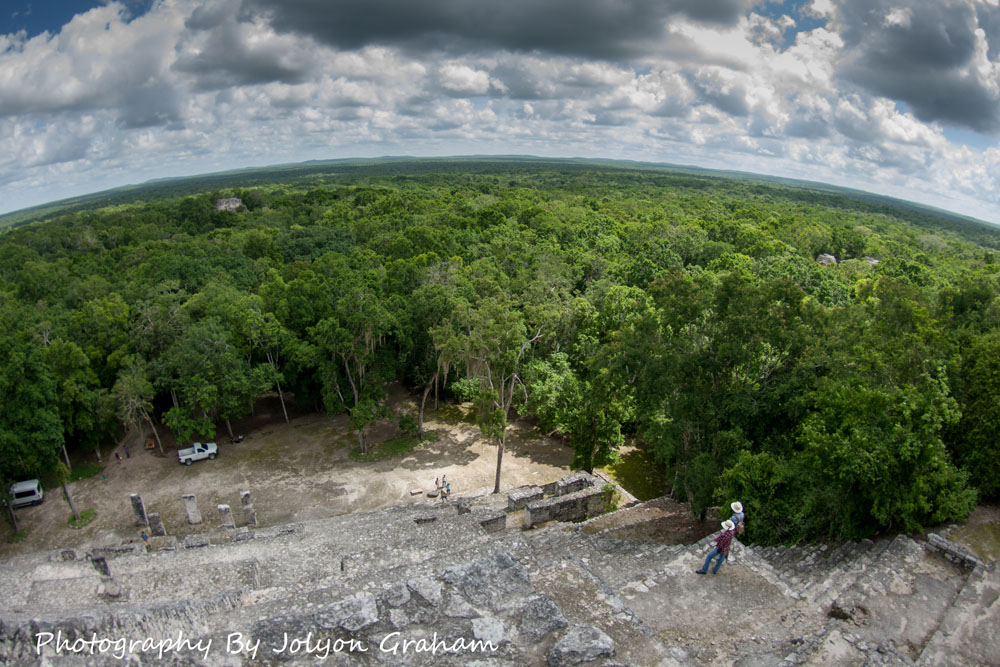 Located in the state of Campeche, Calakmul is a both a protected Biosphere Reserve and an important archeological ruin—making it Mexico’s only “mixed” UNESCO World Heritage Site. The sheer scale of the place is impressive, though perhaps not obvious at first glance. Continuously inhabited by the Maya for more than 1,500 years, the city’s extensive, well-preserved ruins extend across a 70-kilometer stretch of rainforest. Remarkably, only an estimated 1 percent has been excavated to date.

Noted for its three massive stone pyramids and numerous stelae (large, carved tablets), Calakmul’s remains stand gray and silent amid the constant movement and murmur of the surrounding rainforest, alive with tropical birds and butterflies. Wild boar and Yucatán turkeys forage alongside the entrance road. Under the jungle canopy, it’s common to spot keel-billed toucans, lineated woodpeckers, Yucatán parrots and more. The reserve is also home to a variety of monkeys and six species of jungle cat, including jaguars, along with a variety of other native species—many of which are endangered or threatened.

Known as a seat of the Maya Snake Kingdoms and primary rival of Tikal, Calakmul is now believed to have been one of four regional centers of power during the Classic period. Calakmul’s Snake King commandeered a bloody war against Tikal for decades, sometimes gaining territiories and treasure, sometimes losing them. Those who venture to the top of its steep pyramids today are rewarded with a sweeping view over the treetops, giving a sense of how truly enormous the lowland empire once was.

“Walking around, you don’t realize how big it is at first. You have to climb at least one tower to get that endless view above the jungle—amazing! Imagine what it must have been like at one time, with the streets full of people, and now it’s empty. It’s like everyone in New York suddenly disappeared, and the city was overtaken by vines and trees overnight.”

Development is prohibited in the reserve and there is very little infrastructure in the surrounding areas, so it’s crucial to make arrangements for Calakmul well in advance, and to go with a knowledgable guide. The Extratour group included several photographers who were most impressed by the isolation of the site and natural surroundings. One guest reported: “It is definitely off the beaten track, within a dense jungle. I had not heard about it before and not many tourists come here, so you mostly have the pyramids to yourself.”

“Yucatan Dive Trek arranged for a local guide who told us a lot about the area and its history, which was so interesting. Our accommodations at Calakmul were also wonderful and unique. We were very cosy in our nicely decorated bungalows, with the jungle sounds all around us at night…it’s quite romantic!”

“We enjoyed the trip to Calakmul very much! It was great to break up the diving days with something different and cultural. Our guide also took us to visit a nearby bat cave on the evening of our arrival. I’ll admit some of us were thinking, ‘OK, some bats are going to come out…,’ but it was millions of bats, spiraling up from the cave opening at sunset, like a silent tornado of bats. I’ve never seen anything like it! And it just kept going and going. Our photographers had a lot of fun with that.” 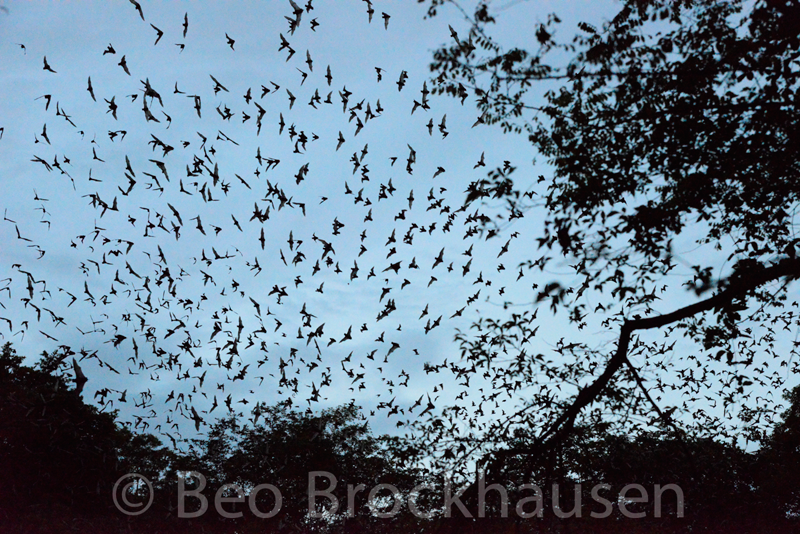 Thanks to Kirsten Clahr, General Manager of Extratour, and photographer Beo Brockhausen who contributed first-hand trip reports and images to this Off the Beaten Trek series. Many thanks also to photographer Joe Graham, co-owner of Absolut Scuba, for the use of his images and impressions of Calakmul. 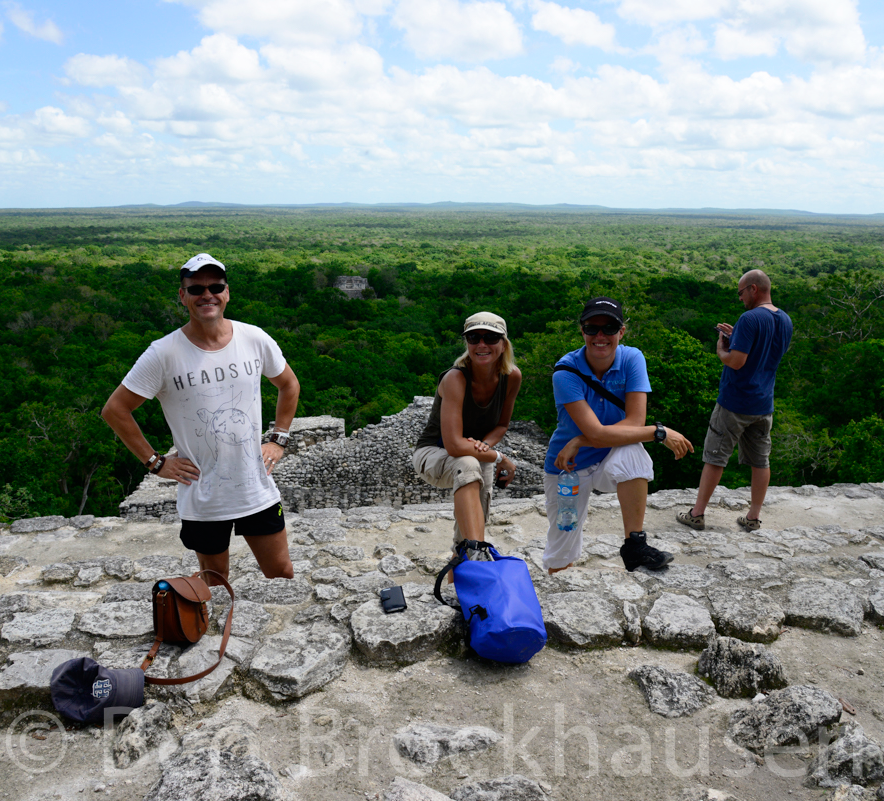 Yucatan Dive Trek is a full-service tour operator based in Mexico’s Yucatán Peninsula, catering to travelers who seek authentic experiences and one-of-a-kind encounters. We specialize in unique diving holidays, organizing and customizing trips to the best destinations in the region—in and under the water as well as on land. Extension trips to the Calakmul Biosphere Reserve and World Heritage Site can be scheduled year-round. Please contact Yucatan Dive Trek for more information.

Sorry, the comment form is closed at this time.