Mexico, Off the Beaten Trek: Dive into Xcalak

It’s fair to say that many travelers, even those who’ve been to the Yucatán Peninsula, have never heard of Xcalak. It takes a little practice just to pronounce it correctly (try “ish-keh-LAK“), and a bit of extra effort to get there. The southernmost town on Mexico’s Caribbean coast, only a few kilometers from the border with Belize, Xcalak is a small, traditional fishing village that sees very few tourists. Perched on the narrow peninsula that divides Chetumal Bay from the Caribbean Sea, it is remote in the best sense of the word: just a few hours’ drive from the glossy resorts of the Riviera Maya, but a world apart in every other way.

You won’t find high-rise hotels, manicured beach clubs or nightlife there, and the locals intend to keep it that way—Xcalak’s protected status came about at the behest of the community and is the result of a cooperative, thoughtfully designed plan between the village, the federal government and several conservation-focused NGOs. In Xcalak, cell phones don’t work very well (if at all) and internet access is “intermittent” at best. Most of the lodging options are small, family-owned beach inns that run on renewable energy and thus, don’t offer amenities such as air-conditioning and cable TV. Why, then, would experienced divers travel from around the world to vacation literally at the end of the road?

As is often the case in travel—and life—the answer can be found just below the surface. Extratour’s General Manager Kirsten Clahr, who has been organizing dive trips across the globe for 20 years, took a chance in bringing a group to a place she had never been herself, trusting Yucatan Dive Trek to customize a “Best of the Yucatán” itinerary.

Diving with Tarpons. Xcalak. Mexico. from Alfredo Barroso on Vimeo.

“I did not know what to expect from diving in Xcalak, but the diving was so nice! The reefs are in beautiful condition. We saw many fish and creatures I had not seen before, like flamingo tongues. Also impressive was the topography of the reef itself, with hangovers and small tunnels that you swim through.”

Located within the Xcalak Reef National Park, a protected and extremely biodiverse ecosystem of coral reefs, mangroves, rivers, lagoons and bays, Xcalak is an uncrowded, unspoiled paradise for nature lovers. It many not attract a lot of people, but those who do find it are usually the type that are happy it’s barely on the map: nature photographers, bird-watchers, kayakers, fly-fishing enthusiasts and, of course, divers looking for that last frontier. The park’s pristine, vibrant reef system is part of the Mesoamerican Barrier Reef, second-largest barrier reef in the world, and home to dozens of unique, untouched dive sites. And if that’s not enough, the legendary Banco Chinchorro Biosphere Reserve is less than 40 nautical miles away.

The sleepy village of Xcalak (pop. 400) may look like an unlikely hub for world-class diving, but the real hub is on a quiet beach just outside of town, at XTC Dive Center. XTC (which stands for “Xcalak to Chinchorro”) is a PADI 5-Star Dive Resort and Instructor Development Center, and the only dive operation running trips in both locales. Their state-of-the-art, self-contained facility is the only one of its kind on the entire coast. Due in part to the remote location, XTC is designed as a one-stop shop for recreational, technical and professional diving at every level. 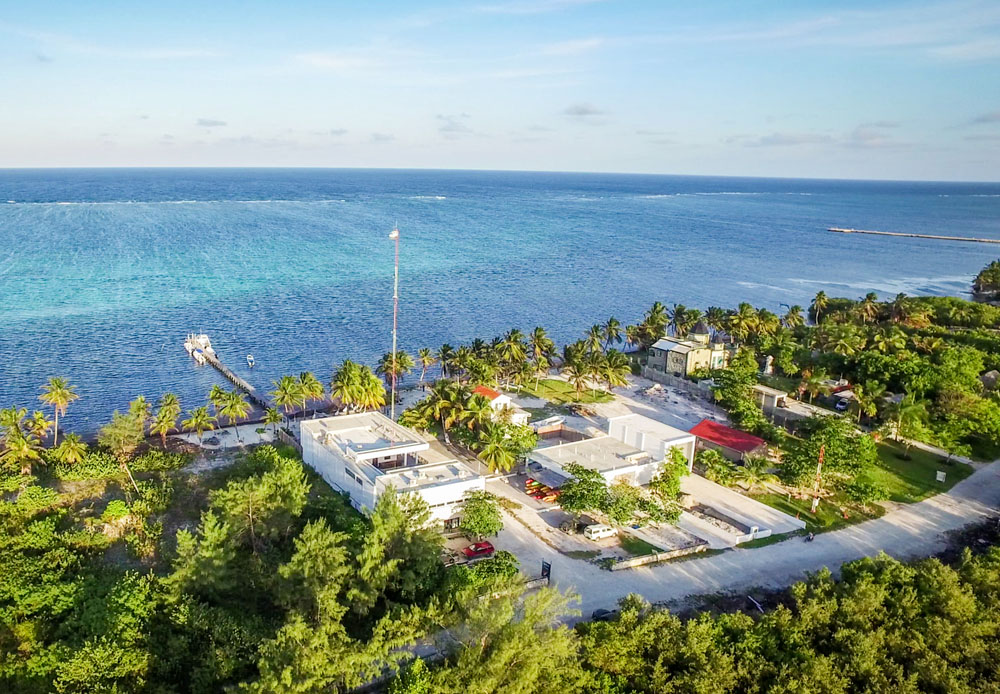 Xcalak Reef is one of the healthiest in the Caribbean, and many of its fantastic dive sites are only 5 to 30 minutes away from XTC’s private pier. One of the better-known sites is La Poza (see video above), also called “The Tarpon Hole,” where divers drop down the coral wall into an underwater highway of 3- to 7-foot-long tarpon, large schools of jack and snapper, and giant, midnight-blue parrotfish. La Poza is the only formation of its type in the entire Mesoamerican Barrier Reef System. Lining its coral wall are lobster holes, morays, schools of small fry, black corals and many other exotic inhabitants. At the end of the dive is a pinnacle called Piedra del Mundo that rises from the bottom of the trench to 15 feet below the surface—the perfect place for a safety stop.

“La Poza was my favorite place! I think it’s the only place in the world to see a school of tarpon that size—they are 3 to 4 meters in length and there are hundreds of them! I went out there for 4 or 5 dives and it was excellent every time.

You can find out more about diving in Xcalak on the XTC Dive Center website. The Xcalak Reef National Park protects species of amazing biodiversity both under and above the water. Along with 31 species of listed land mammals, many of which are rare and/or endangered, there is a large population of manatees in the bay, some of which show up at the dive sites on lucky days. The Xcalak wetlands are also a designated Ramsar Site, making this national park one of the most widely and thoroughly protected in the region, with enough measures in place to ensure it stays that way for years to come. 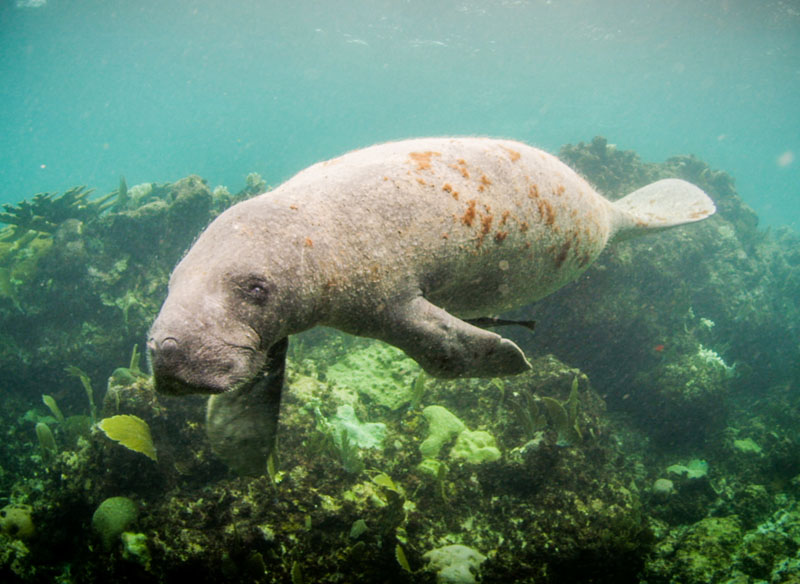 “Our clients really did not know what to expect on this trip, especially in Xcalak. After one day, they understood completely! They constantly told me how unique this experience was for them. The trip was designed intentionally to show them something different, and people really appreciated it.” 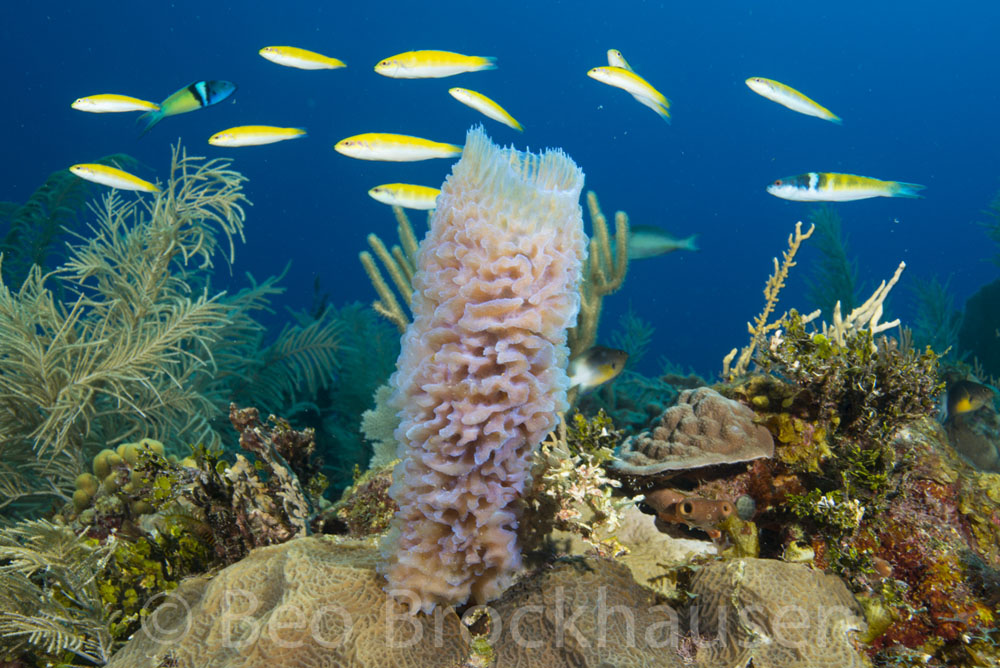 Many thanks to Kirsten Clahr, General Manager of Extratour, and her husband, underwater photographer Beo Brockhausen, who contributed trip reports, photos and video to this Off the Beaten Trek series. Thanks also to Alfredo Barroso / Azul Oceano for the video of La Poza!

Tune in next time for field notes and pictures from Banco Chinchorro Biosphere Reserve, home to miles of protected reefs, hundreds of shipwrecks, and the largest population of wild American crocodiles in the world….

Yucatan Dive Trek is a full-service tour operator based in Mexico’s Yucatán Peninsula, catering to travelers who seek authentic experiences and one-of-a-kind encounters. We specialize in unique diving holidays, organizing and customizing trips to the best destinations in the region—in and under the water as well as on land.

Sorry, the comment form is closed at this time.